Luke 23: Jesus was taken to Pilate and charges were brought against him. Jesus is being led toward his crucifixion with a huge group of people following behind. The crowd said, "Crucify him”!

The other criminal sticks up for Jesus. “Doesn't he have any respect for God?” They've committed real crimes, which are deserving of a punishment such as this. But Jesus has done nothing wrong.

Then he tells Jesus to do him the tiny favor of keeping him in mind when he enters the kingdom. Jesus responds, "Truly I tell you, today you will be with me in Paradise" ~ Luke 23:43

When they get to a place called "The Skull" Jesus is crucified with two other criminals, one on each side.

The account of the Thief on the Cross encourages Christians faith, but how about Jesus, dying alone on the cross? What did it mean to him?

The Father blessed his Son with this strange companion during his last hours. A companion who is a believer, and a very strong believer. Jesus was often irritated at the unbelief he saw around him. His disciples themselves often exhibited "little faith. Jesus is amazed at this man’s faith.

As a teacher it is encouraging to have a student who grasps what you are trying to communicate. Even if most students fail to understand, having that one student who “gets it” brings great satisfaction.

The thief on the cross “gets it” and brings joy to Jesus’ heart.

As Jesus dies for our sins, he does not die completely alone. The Father gives him a companion, a believer with mighty faith, a believer who can look past the raw wood, nails and blood to the heavenly kingdom that Jesus will inherit.

He is a believer who wants "in". Jesus answers him as life on earth nears its end, "Yes, you'll be with me there today in paradise. We'll go together, you and I."

What faith! What promise! What privilege! What glory! 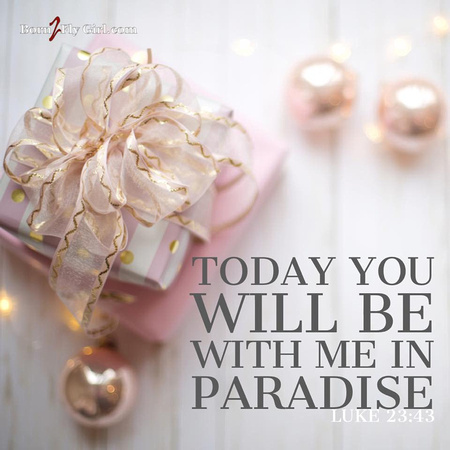