Luke 22 is the chapter in which Luke tells of Judas’ betrayal of Jesus, the Last Supper, the arrest of Jesus, and Peter’s denial that he is a follower of Jesus. Once again, while Jesus is facing trials, while he has a lot going on, he instructs the disciples to be like a servant.

Luke Chapter 22:27 ~ Later, the apostles began to argue about which one of them was the most important. But Jesus said to them, “The kings of the world rule over their people, and those who have authority over others want to be called ‘the great providers for the people’. But you must not be like that. The one with the most authority among you should act as if he is the least important. The one who leads should be like one who serves. Who is more important: the one serving or the one sitting at the table being served? Everyone thinks it’s the one being served, right? But I have been with you as the one who serves.”

Being a servant does not mean that we are unrewarded. It’s quite the opposite; God's greatest servants receive the greatest rewards. “Who is more important: the one serving or the one sitting at the table being served?” The world regards the one who is served as greater, but Jesus showed us that true greatness is in serving, more than in being served.

Jesus did not mean that if you serve in a lowly place, you will always be given a great place. He meant that in God’s eyes, the lowly place is the great place.

Think about this, the people who are really great in our lives are the servants. If elected officials took a month off, no one would really miss it; but if all the trash collectors in the country took the month off, we would notice, things would get messy. Jesus is trying to re-arrange our thinking, our priorities.

The hero in Christ's army is not the one who has rank and title. It is the one who is kind to all, thoughtful for all and has a heart to feel for all. This is the truly great man in the eyes of God! Let's follow greatness like this, let's minister to the needs of others. Let’s do good for bodies and souls. 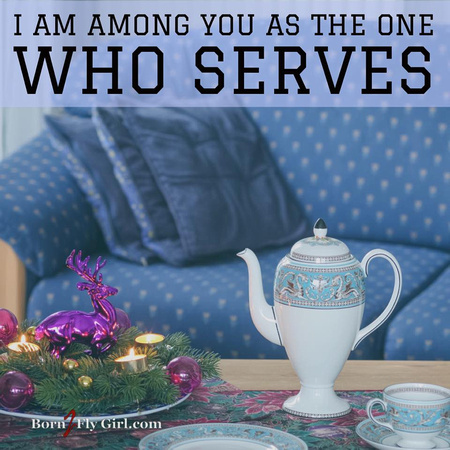