As the day declined, the Twelve said, “Dismiss the crowd so they can go to the farms or villages around here and get a room for the night and a bite to eat. We’re out in the middle of nowhere.” “You feed them,” Jesus said.

They said, “We couldn’t scrape up more than five loaves of bread and a couple of fish unless, of course, you want us to go to town ourselves and buy food for everybody.” There were more than five thousand people in the crowd.

But he went ahead and directed his disciples, “Sit them down in groups of about fifty.” They did what he said, and soon had everyone seated. He took the five loaves and two fish, lifted his face to heaven in prayer, blessed, broke, and gave the bread and fish to the disciples to hand out to the crowd. After the people had all eaten their fill, twelve baskets of leftovers were gathered up. ~ Luke 9: 12-17

Think about the command from Jesus: “You feed them”. To the disciples, this request must have sounded strange or even shocking. It was obvious to them that they did not have the resources to feed even a fraction of the people. With this statement, Jesus challenged both their faith and their compassion.

Jesus could have taken credit for this miracle, but rather He insisted on doing this miracle through the hands of the disciples. He wanted to use the disciples. This is what Jesus asks us to do. Be his disciples here on earth and spread God’s word and promises to those we surround. 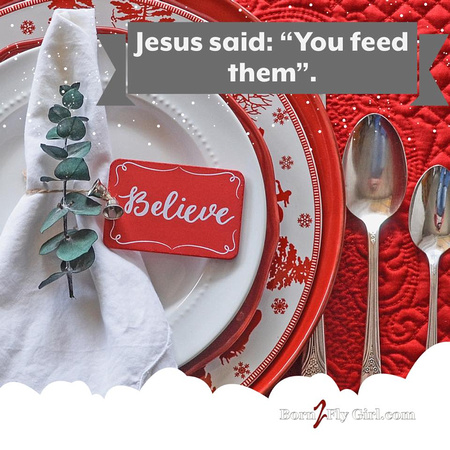