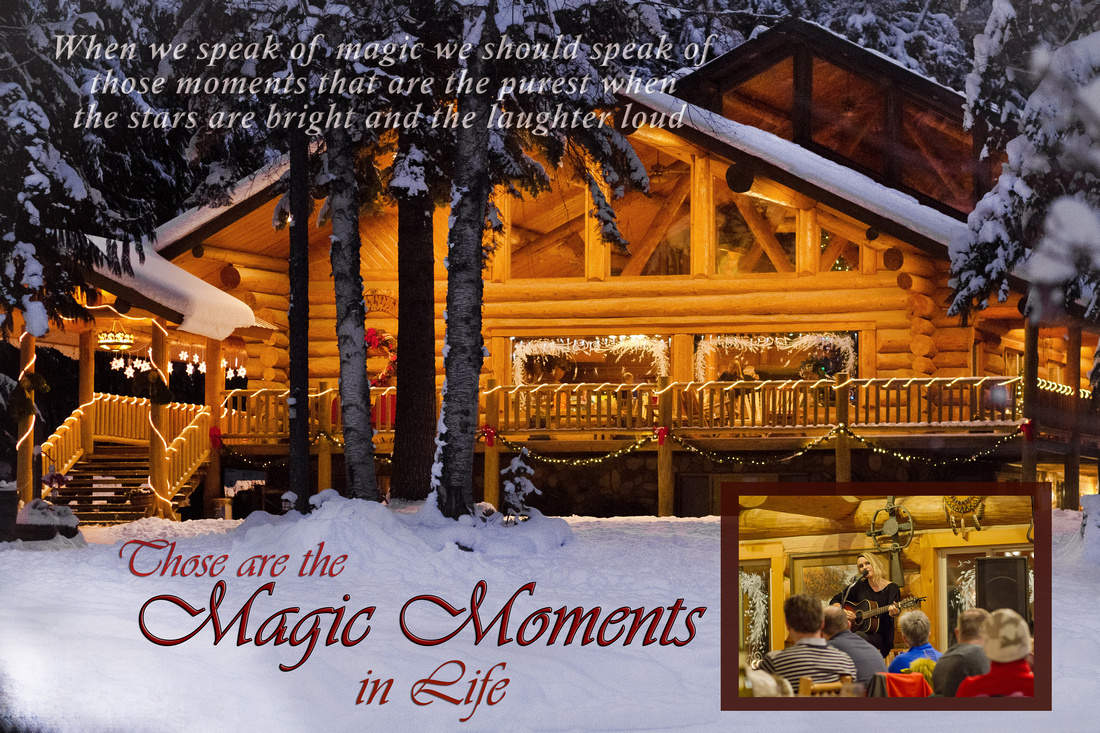 True North ~ A passion in life that leads to extraordinary experience.

Music evokes emotions that move us.  I have been “moved” by music to visit many venues in my travel adventures.  My concert travels have taken me through several states and into many venues. From festivals to honkytonks and county fairs to coffee shops, I have traveled to listen to chart topping headlining acts and to up and coming artists.  My recent travels on Highway 95 in North Idaho took me to the community of Sandpoint. Crossing over the long bridge and past the beautiful Lake Pend Oreille, I traveled a few back roads into the southeast Selkirk Mountains through snow covered pines and at the end of Upper Gold’s Creek Road I found the Western Pleasures Guest Ranch.

What moved me to this northern location?  The music of Kristy O!  Kristy Osmunson is one half of country music’s newest duo American Young. Kristy is a hometown Sandpoint girl and returns home each year to entertain locals.  Kristy was the featured artist for the three night Christmas concert series at the Ranch, performing hit songs from her Bomshel days, songs she has penned for other artists and new soon to be released material from American Young.

Kristy Osmunson's evolution as a songwriter and recording artist is showcased as she spins a story line between each of the songs she performs. The audience sits enamored by each word and musical note as she shares the experiences of her musical career.  Kristy opens her set with one of American Young's newest songs American Dream.

I want a sunrise with nothing in the way

Waking up on a wheat field with broken old two lane

Leading out to a dirt road

And mail box with my last name

Where there ain’t no Monday morning rush

And there ain’t no one hour break for lunch

The only ties are the ties that bind

The only time clocks are the ones we wind

And there ain’t no place that you can’t park

There ain’t no street lights after dark

No locking the front door up

No sirens to interrupt, my American Dream

The song speaks of the quiet living in her hometown as well as the lifestyle at the Western Pleasures Guest Ranch which boasts stunning views and fresh mountain air.  The ranch is a rustic vacation get away that takes you back to a time when days were simpler. It is a location where you can enjoy a sunrise with nothing in the way.  As Kristy continues with her set, she shares adventures of a girl band on the road with 19 and Crazy.  I’ll be Just Fine and Cheater, Cheater she explains, were written following the breakup of a relationship.  As she introduces I Would ~"If you ask me to, if you said say I do, I would", she shares her story of finding true love and inviting a marriage proposal.   Kristy sings Love is War, a song that introduced American Young to the country music community.  Kristy and Jon were given the opportunity to perform this song (watch video here)on the Grand Ole Opry stage.

Young lovers in a picture frame

Ever notice how there ain't no rain

Nobody hangs hard times on the wall

But there's a storm every now and then

A slamming door down the hall

Sometimes love is a white flag

Sometimes love is a feather

But it's worth fighting for

“Sometimes songwriting is great therapy” she says as she discloses the story behind God Sends a Train a song she wrote about her mother being hit by a train.  A song that has not only been healing for her, but for those who find the song speaks to them and the obstacles they have had to overcome.

Carried it on the rail

And when we don’t want to listen

They said she never walk again

But that first step she took

Was straight down to the court house

She got rid of his ass for good

Much like the sleigh rides that are available during the Christmas season at the ranch, Kristy took the crowd on a magical journey on this evening.  A journey through her songwriting process.  “They say God holds the pen when we are writing a song” she says, “but I believe that the song is placed inside us and when we bear our soul, it emerges as a spiritual experience into a song”.

Kristy’s musical artistry continues to evolve as she refines and enhances her craft leading her on an exploration to find her True North as a songwriter and recording artist.  Follow Kristy and Jon at americanyoung.com as they pursue their American Dream.  Join Kristy and Jon in the American Young Movement.  Watch the newest American Young videos here and preview the future of AY.   Be inspired to find your True North.

Vicki Gertje(non-registered)
Wow! What a beautiful place, and your photos are like post cards! Stunning! You'll have to go back in the summer and get a whole new set of photos! Western Pleasures Guest Ranch looks very therapudict and like a great place to get recharged.
Linda Wirch(non-registered)
Amazing, inspiring, and beautiful!! Music is and can be therapy to many, and what a wonderful experience! Love my own hometown in Idaho, so I love that Kristy goes home to share her beautiful gift of songwriting.....and her amazing voice! I feel like I was there...wonderful post friend!
Born to Fly Girl
You're welcome! Western Pleasure Guest Ranch and Kristy O. were a great pairing for a magical winter evening in North Idaho.
Western Pleasure Guest Ranch(non-registered)
Thank you for sharing your beautiful photography and for taking us back to that special evening when Kristy O. took us on her amazing musical journey.
No comments posted.
Loading...